My hubby has been working really hard lately. There's something major about to happen at work, which is neither here nor there, except that normally, since the promotion, he doesn't do a whole lot of "hands on" getting dirty stuff, but this weekend he was in the trenches. He got DIRTY! When he came home Saturday night he didn't even come in and say hi. He went straight to the Laundry room, stripped his clothes off, hung them over the sink, and took a shower. I didn't even go in that room all day Sunday. On Monday I went in and, I kid you not, I almost fell over from the smell in there! It was bad.
When I told him about it he said "So what you're telling me is that it wasn't B.O. it was beyond B.O., it was B.B.O.!" Funny. You are a funny man. :) (in case you didn't catch it -- Seinfeld ... there's this one episode about the valet ... and "what am I hard of smelling?")
Anyway, I'm sure you can guess that the first thing I did, after opening the window, was throw them in the washer! They came beautifully clean, but this is what I was left with: 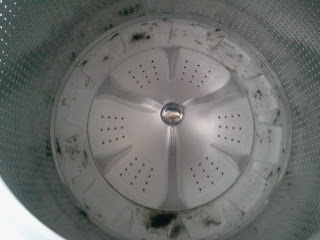 Yeah, that's the grease like from train wheels ... and it's thick too. I was afraid to put another load of laundry in, but what to do? I had some affresh tablets so I ran that cycle. It didn't even touch it. So I had hubby look at it when he came home last night. He tried scraping it off with his fingernail. Not much happened.
I thought maybe I could try my softscrub, but I was afraid of what the suds would do to the machine, you know? He said maybe the wipes he keeps in his truck that all the guys clean their hands with would work. It's some auto mechanic thing. So I said "good idea!! just leave me some in the morning." He forgot.
I had to get some laundry done, there was a big pile!
Then it hit me. It was an epiphany from the Lord.  That's all it could be!
Like dissolves like. The most basic principal in chemistry -- a class that I never took! I just read it somewhere when I was researching the Oil Cleansing Method. Wait. I never posted about that? ...
Anyway, I have this pledge orange oil for dusting﻿ and polishing furniture. It's in a spray bottle, so I just sprayed some on there and let it sit for a few minutes. Then I went and got some paper towels -- had to be disposable (I didn't want to end up in the same predicament when I washed the rags) and started wiping away. Do you know it came right off??? No elbow grease required --  and it's a good thing too! You know I'm not quite 4'11" right? It's tough just reaching in to get the laundry out ... Here's the after picture: 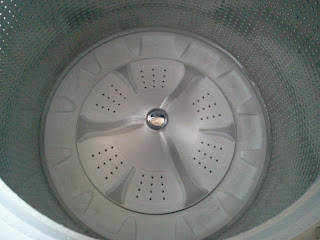 There are still a few light gray "stains" on the bottom where the plastic is permenantly discolored, but can you believe it? After I got the oil and grease up with the paper towels I sprayed it down with distilled white vinegar and wiped that up too.  Good as new!
How's that for natural cleaning? Awesome!﻿

Posted by A Healthy Helpmeet at 11:35 AM